Another Great Addition to The Massey Staff! 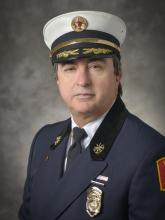 Gerard Fontana joins the Massey team after working thirty- six years with the Boston Fire Department where he attained the rank of Chief of Operations.  Gerard Fontana began his career in 1984 as a firefighter and has attained every rank until his appointment as Chief of Operations in 2014. Chief Fontana is a graduate of the University of Massachusetts and the National Fire Academy’s Executive Fire Officers Program.  He has also attended the Executive Leadership Program at the Naval Postgraduate School.  Chief Fontana has also served as the Emergency Management Director for the City of Boston. As Chief in charge of the Office of Field Services, he facilitated many planning documents for all events and exercises held by the Boston Fire Department.  He also coordinated the Special Operations Division and established the Victim's Assistance Unit, taking care of the immediate needs of victims displaced by fire. He was awarded the Boston Fire Department’s Gerard G Molito Award for Professional Excellence for making major improvements in firefighting operations and enhancing the safety of the firefighting forces.

Retired Chief Fontana was born and raised in Boston and is the proud father of three adult children and a recent proud grandfather.