What to do After Disaster Strikes 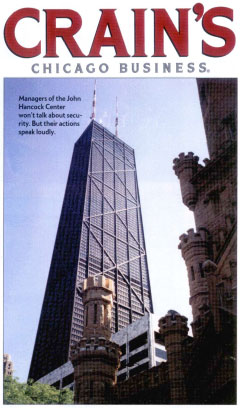 John Hancock Center management will say two things about security. One: Built as a combined residential and office building, the Hancock has been "dealing with 24/7 security efforts since 1970."

Two: "Not discussing security measures is part of what helps keep the building secure." Both comments come by way of a spokeswoman for the San Francisco-based owner, Shorenstein Properties LLC. In fact, the Shorenstein folks, who have owned the Hancock since 1998, also asked their security consultants and vendors not to talk about the 100-story skyscraper.

Visitors actually can get a pretty good idea of the Hancock's attempts to prevent a disaster just by walking into the building. Witness the physical barriers, security monitoring tenant key-cards and guest registration.

What is less known, and perhaps more interesting, is what the Hancock has done to prepare for the aftermath of an emergency. Like many high-rises in Chicago and elsewhere, the John Hancock Center has a disaster plan, which is essentially an outline for getting firefighters in and taking tenants out.

"Response planning is probably more important than implementing some of the security measures because it's how you respond in real situations that can save lives," says Henry Garcia, a Chicago vice-president of security consulting and engineering for Kroll Inc., which consulted with the Hancock and other major Chicago buildings right after Sept. 11. "You can't predict a terrorist incident, so let's do mitigation to deal with potential scenarios."

PREPARE FOR THE WORST

The Hancock Center's disaster plan was developed by Curtis Massey, a former firefighter and now CEO of Massey Enterprises Inc. in Virginia Beach, Va., which also created the disaster plans used by two buildings adjacent to the World Trade Center on Sept. 11, as well as plans for about 50 other Chicago buildings.

Mr. Massey designed the Hancock's plan before Sept. 11 and continues to keep it up to date, yet he couldn't talk specifics (see above). But he did describe how he works, and why these sorts of plans are important.

Mr. Massey and his staff of 25 gather blueprints, collect data from building engineers and inspect the property, ultimately developing a detailed plan that includes everything from the location of power cutoffs to notes about tenants with potentially troublesome office contents, like heavy equipment or hazardous substances.

They also train building staff and firefighters, and sometimes police and emergency medical personnel. Plans are kept in a building's fire command center or security console, with backups in the manager's and chief engineer's offices.

Stairwells are a particular concern, since most people assume that if they can get to an undamaged stairway they'll be able to make it down. In fact, Mr. Massey says, "stairwells are a safe area of refuge only until the fire department gets there and starts doing their thing."

A stairwell can become congested with all the equipment and fire fighters, but what's even more dangerous is that it can act as a chimney for deadly smoke and fire gases that escape as doors are propped open for firefighting.

THE COST OF SAFETY

Each of Mr. Massey's disaster plans takes six to eight months to complete and costs 4.5 to 6.5 cents a square foot, depending on the number of stories in a building (the taller the building, the lower the cost per square foot). A plan for a building like the John Hancock Center, with about 1 million square feet of commercial space (the portion owned by Shorenstein), would run about $45,000.

A spokesman for the Chicago Fire Department says major commercial buildings like the Hancock have gone out of their way to cooperate with the city while strengthening security and planning for disasters.

"Expense has been no problem for the building owners in making sure they have state-of-the-art equipment and are sharing information with us," he says.