In any high-rise fire, it is vitally important to understand everything there is to know about the area from which most operations will be orginating - the core.  This series of articles examines characteristics, features and oddities of core configurations and their performance during fires including stack effect.  It is written based on office buildings with two primary exit stairwells - the most common configuration in properties with small to medium-sized floor plates.

Types of core designs.   There are numerous types of cores: center, side, end, dual, and multiple (see Graphic A).   Virtually any configuration you can imagine exists, although the majority of modern office buildings utilize a center core design.  Note that two of the drawbacks to center core design evolve from the fact that if there is an open hallway encircling the core, there will be a "wraparound effect" that will have to be addressed.   Not unlike fighting fire in an attic with a mansard roof, you can push the fire one way and have it wrap around you in the opposite direction.  Attacking a core area fire from on stairwell can allow the attack team to possibly push the fire all the way around the core back to their point of entry, as with a dog chasing its tail.  Attacking the fire from both stairs can cause the crews to push the fire toward each other with opposing hoselines (the crew possessing the bigger line wins the battle!).  Obviously, this can prove very dangerous.  What is contained within the core? The core contains the primary building services that allow the building to function, including methods of moving people.  You can find risers, chases, shafts and rooms for water (fresh and waste), electricity, ventilation, natural gas, liquid fuel and communications.  You may also find trash chutes, mail chutes, mail conveyors and dumbwaiters ( the last two are sometimes found near, but not in, the core).  Restrooms, storage areas, load-bearing structural components, elevators and exit stairwells comprise the remainder of the core area.

In some tall buildings, the core can take up to 30% fo the total floor area at the base of the building, due to vertical transportation demands.  Examples include: 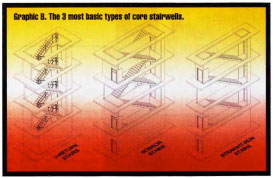 Types of stairwell configurations. You can find three primary types of stairs in modern office buildings within the core: U-return, scissor and straight-run (see Graphic B). U-return stairs stay in their given area as they ascend, reversing their direction at the mid-point between floors, but always discharging at the same point on each floor (for example, the north stairwell stays on the north side of the core). Scissor stairs discharge at opposite sides of the core on alternate floors (for example, the stairwell that originates on the north side of floor 1 will discharge next on the south side of floor 2). Straight-run stairs go directly from one side of the core to the opposite side of the floor above and terminate there.

Beware of improperly labeled stairs! I have seen scissor stairs labeled north/south and east/west on the interior of the shaft. The shaft has to be labeled in a non-directional fashion (such as A-B or 1-2), since every other floor the stair is discharging on the opposite side of the core - facing the other direction. Stairs should always be properly labeled for firefighters (yet rarely are), giving the floor number, shaft designation, whether there is fire department roof access and ideally what street and direction you are facing (see Graphic C).This is vitally important to interior operations and the command post. The next re-entry floor, or exit floor, also should be noted, primarily for the tenants. Preferably, the signage should be on the wall adjacent to the stairwell door opposite the hinge side, not on the back of the door, which moves.

Smoke towers. There are two basic types of smoke towers, commonly found in older high-rise buildings. One is where you walk from the floor through a door into a vestibule, then through another door into the exit stair (see Graphic D). In the vestibule there is an opening (or two) in the wall that may be covered with louvers/smoke dampers. The opening(s) can vary in size and the louvers may either be open all the time or may only open during a fire by an actuating device or manual operation. Open shafts with no louvers exist as well. The opening(s) lead directly into an adjacent smoke shaft (or two) that is designed to pull the smoke into it and away from fleeing tenants before they enter the stairwell itself. There may or may not be fans present to assist in ventilating the smoke. In theory, the smoke stays out of the exit stair while people evacuate from upper floors.

The other smoke tower (commonly referred to as the "Philadelphia Smoke-Proof Tower") is the same thing except the vestibule is exposed directly to the outside, so no smoke shaft is required (see photo on page 76). As with the interior smoke towers, the opening may or may not be louvered. The objective is identical - keeping the smoke out of the stairwell.

Smoke towers have been proven to be very effective in preventing stair contamination in most instances involving tenant evacuation in fires. One major drawback is the fact that they may be used by the fire department as the attack stair, especially if it is closest to the fire; then the design becomes a significant impediment. If the standpipe (or hose cabinet) is located in the stairwell, both doors in the vestibule will have to be propped open, compromising the integrity of the exit stairs.

If the standpipe connection is located in the vestibule (in a hose cabinet or exposed standpipe), the design intent is to allow a fire attack to take place without opening the second door and compromising the exit stair. Unfortunately, aside from the impossible task of flaking out a 100- or 150-foot attack line in a vestibule the size of a closet, it is too dangerous to attack the fire from a connection that may be only a few feet away from the fire itself. The crew will be attempting to advance an attack line out of a chimney. The smoke shaft will be trying to pull the smoke into it, but that will also act as a vacuum in pulling the fire towards the vestibule (and stairwell). If the fire involves any appreciable area and amount of combustibles, this will be a fight that will likely not be won - especially if windows have failed and there is a fresh air supply feeding in from the opposite direction. The crew will take a terrible beating and no headway will be made. The attack will have to be abandoned and re-initiated from the other stairwell (which usually would not be a smoke tower). This will take considerable time and effort.

One exception to this case would be where both exit stairs are smoke towers (see Graphic D), which can create a situation where a successful fire attack cannot be mounted from either (or both) stairs in serious fires. An exterior attack may be the only option if it is reachable from ladder streams. Otherwise, the stairs may have to be closed on the fire floor while the floor above is protected from the safety of the core (if possible, as with open floors/small floor plates) and allow the fire floor to consume all available combustibles, hoping that auto-exposure, curtain wall voids, privacy stairs, etc. are not allowing the fire to spread vertically. From a design perspective, smoke towers are intended as evacuation stairwells, NOT attack stairwells.

Remember that if there is a hose cabinet located in the vestibule, the doors will swing open the wrong way facing toward the floor. If the fire is correctly attacked by connecting on the floor below, the cabinet door opens in the direction of the stairwell, thus impeding stretching a hand line into and up the stairwell to the fire floor. The door most likely will have to be "removed" with an axe or halligan tool. Also, note that with "Philadelphia Smoke Towers" being open to the outside, wind conditions will dictate their effectiveness! A strong wind can push the smoke back inside the building, negating their design and even worse, causing a wind-tunnel effect on the fire floor as air is being forced onto the fire floor from the exterior with the stair doors open.