Fire on the 16th Floor

It's Saturday morning at 9:00 a.m. and the call goes out to the Philadelphia Fire Department that the fire alarm system has been activated on the 16th floor of the east tower at Centre Square.  A pull station and multiple smoke detectors on the floor have reported back to the Fire Command Center as active.  To add to the problems, part of the floor is under construction so the fire sprinkler system has been shut down for the day.  In addition to the aforementioned contractors there are also some tenants working on the floor.  The building staff prepares for the arrival of the fire department with critical elevator and building master keys at hand, elevators standing by, and the building's emergency plans and floor plans laid out for ready reference.

All this occurs under the watchful eye and guidance of Curtis Massey.  A retired Fire Officer with over 20 years of firefighting experience, Curtis is the president and CEO of Massey Enterprises.  In addition to disaster planning services Curtis Massey is also actively involved in providing advanced high-rise fire department operations training to major city fire departments throughout the U.S. and Canada.  During the months of March and April Curtis Massey conducted classroom training for the Philadelphia Fire Department and as a follow up to each session there was a live high rise drill at Centre Square's East Tower.  With fog machines simulating dense smoke conditions, bright red lights marking the seat of the fire, and building staff helping out as mock victims, the conditions gave all those participating in the drills a sobering sense of what could happen during a high-rise office fire. 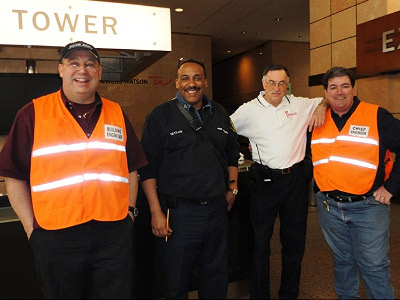 It's not often that drills such as these occur which is why Reit Management & Research LLC and the Centre Square Operations Team welcomed the opportunity to host the high-rise drills.  Taking place on scheduled Saturdays, a total of 8 drills were conducted with approximately 350 firefighters participating.  Also playing a role in each of the drills were the building's security, engineering, management office, and cleaning supervisory staff.

From the perspective of the Centre Square Operations Team this was an invaluable opportunity to test and refine our emergency response procedures.  Furthermore, since we had the chance to participate in all eight drills we were able to learn from each session and our response improved each time as we received welcome feedback from Curtis Massey and the Philadelphia Fire Department.  One of the most important aspects learned was that in order to be properly prepared we must have a basic understanding of how the fire department will respond to an emergency.  First In Companies, Lobby Control, Reflex Time, Incident Command, Major Incident Response Assignment (MIRA), were all new to the building staff, however, with each drill we came to better understand the significance of these terms. 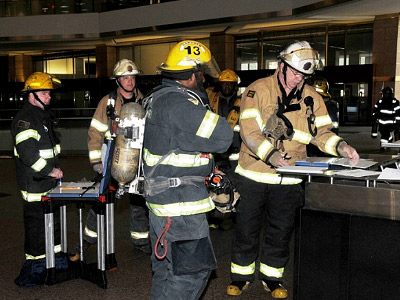 During the course of the drills the Philadelphia Fire Department was also evaluating and refining their policies and procedures.  Rapid Ascent Teams, Portable Stair Pressurization, and the need to communicate the fire attack stair to building personnel, were all incorporated in the drills.  During the post op evaluations Operational Procedure #33 (OP33), High Rise Firefighting was also discussed and how it could be improved. 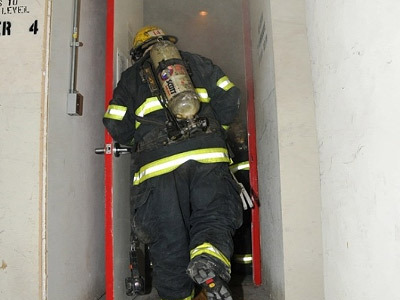 While certainly not a new concept one of the most important aspects of participating in these drills that was emphasized for our staff was the dangers of the "fire attack stair".  Between 2003 and 2008 seventeen victims died in stairwells well above floors that were engulfed in flames.  While many articles have been written on this subject it is an important topic that can sometimes be overlooked when a property management team is developing emergency procedures for the building.  Keeping in mind that firefighters will designate the fire attack stair early on in the process it is vital that the building staff obtain this information and begin making the appropriate announcements to help ensure that only the evacuation stairs are used to exit the building.  As a result of the training that took place during these drills Centre Square has implemented policies and procedures that take into account the designation of a fire attack stair and an evacuation stair(s).  Announcements made from the Fire Command Center will advise tenants which stairwells are safe to use for evacuation in the event of a fire.  Tenant emergency procedure manuals have been updated and tenant safety warden training will cover this topic as well.

Another important aspect of emergency response that was covered by Curtis Massey was identification vests for key personnel such as the Chief Engineer, Building Engineer, Security Manager, and Building Manager.  These vests, typically called incident command vests, are readily available and play an important role in allowing emergency responders to pick out key personnel in a crowd.  Their effectiveness was immediately apparent during the drills and fire department personnel remarked favorably on how helpful the vests were in coordinating with the building operations team when arriving on the scene. 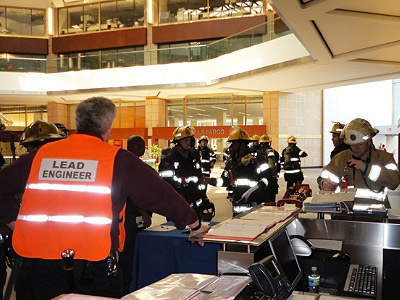 When all was said and done the one overriding theme voiced by everyone involved with the exercises was how helpful they were with many of the firefighters personally thanking us for the opportunity to practice high rise operations in the building.  From climbing stairs and carrying down victims in full Turnout Gear to searching large floors in near zero visibility the conditions offered many realistic challenges.  For the building staff we now better understand the implications of the fire attack stair.  Stack effect and the negative consequences of propping lobby doors open is also an important consideration that the building staff can address.  Additional details such as having enough elevator fire service keys for the Lobby Control Firefighters and separate master keys for the companies heading up to the floors is also important.  The drills also drove home the importance of our ongoing staff training and tenant fire drills. 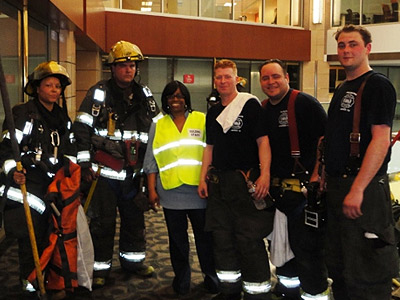 In closing, the opportunity to train with the Philadelphia Fire Department gave us all a new found appreciation for the dangers and challenges that Fire Fighters face on a regular basis.  We extend our sincere thanks and appreciation to all the brave men and women of the Philadelphia Fire Department for their ongoing dedication and commitment to service.  We would also like to thank Curtis Massey for his continuing efforts in fire emergency response training.