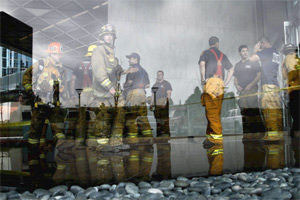 An alarm sounded at 9:20 a.m. Saturday to signal that a strong earthquake had rocked the gleaming, triangular Century Plaza Tower North, sparking fires on its 33rd floor.

Rapid-Ascent Teams encountered thick smoke, leaking gas lines and broken water mains needed for fire suppression as they scrambled up a stairwell to help trapped and injured victims.  The air reverberated with the sound of a fire department helicopter circling overhead.

The high-rise emergency response drill, one of the largest ever conducted in California, had all the elements of a full-fledged disaster.

Hanging over the faux catastrophe was knowledge of the recent natural disasters in Japan and New Zealand and of 17 civilians who died in high-rise fires in Chicago, New York and Toronto from 2003 to 2008.  Those 17 victims died of carbon monoxide poisoning in stairwells well above floors that were engulfed in flames.

“Stairwells can be deadly places to be in fires,” said Curtis D. Massey, president of the disaster-planning firm Massey Enterprises.  “A mission of this drill was to test and refine the way rapid ascent teams use stairwells to attack fires and guide victims to safe refuge.”

The Los Angeles Fire Department and Massey Enterprises spent a year preparing for the drill, which involved nearly 100 participants.

In line with strategies adopted since Sept. 11, 2001, many firefighters took elevators to floors a few stories below the fire.

“Traditionally, elevators were never used in high-rise disasters,” LAFD Battalion Chief John Miller said.  “But we’ve found that safety checks and new technologies, including seismic sensors capable of taking elevators offline if necessary, have made the use of elevators much safer.”

“As much as we practice, there are always lessons to be learned and a few curve balls to overcome,” LAFD Deputy Chief Mario Rueda said.  “Today’s drill is no exception.  The job of firefighting is much more complex than it used to be.”